The Loopies captured Bratislava with their creativity

Once a year, we put our minds to work, to draw the best strategy in order to conquer a place (of course, in a metaphoric and peaceful way). This year, we chose a challenging target – Bratislava – and, after a long and careful period of planning, we defined the best ways in which to subdue everything on our road to Bratislava to our will.

The beginning of the story

Ready to go on the battlefield, we decided to give a final boost to our creativity. Just like a true warrior, we broke down our office door and we embarked in our noble quest to capture Bratislava. For now, in a picture, not a cage.

So, we took the way to Budapest, the first stop of our adventure. After a few hours of searching for the weakest link of that wonderful city, it was time to rest and fill our combat-emptied bellies. In their attempt to undermine our efforts, they lured us with a local specialty– yes, you’re right – the f…amous goulash. It was so tasty that we slipped a cellphone into it, to snap all the ingredients – please don’t ask any further information because it was a painful experience… for some. 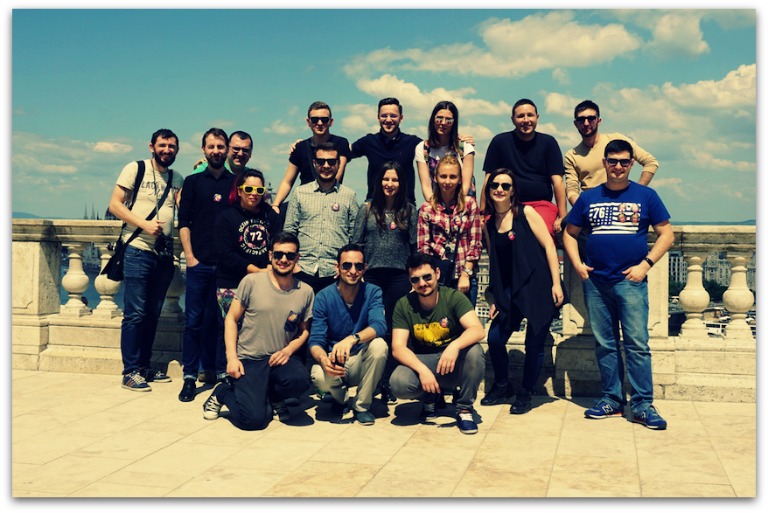 Fortunately, they did not manage to throw us off-board of our quest. After we were sure that our cameras are hot enough we walked to the next objective, confident that we will have many other things to subdue.

It was the evening of our first adventure day and the “German sauna” with four wheels brought us near to Bratislava, on a bank of the Danube. Like true conquerors, we made camp in an easily defendable, strategic place: we slept in wooden bungalows. Try to imagine the smooth green grass, the soundtrack of the nature and the smell of fresh water caressing our tired bodies (and souls). That was the best battlefield headquarter that we could ask for… 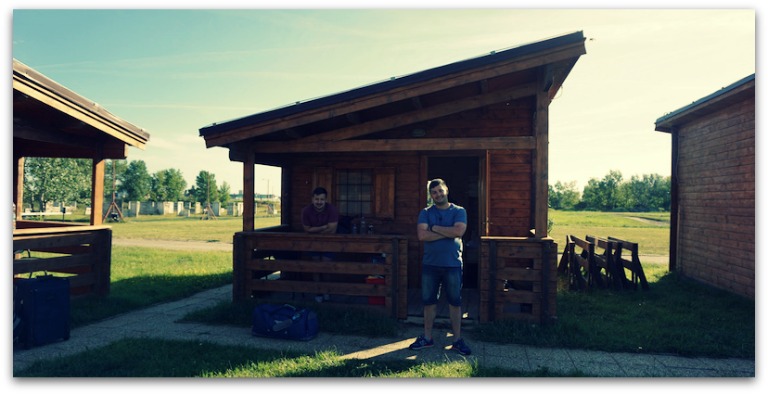 The next morning, we woke up early and after a cold as ice shower and two fried eggs for each Loopie, we were finally prepared to make the main assault on Bratislava. Everybody in the (military) van: again, I’m glad that nobody ate ham… huh, rhyme. We arrived in town and we had part of a life lesson – don’t even think about trying to park in the old city center an almost eight meters long Mercedes-Benz Sprinter Travel, plus an extra three meters long trailer. It should be considered a sin! However, we found our way… somehow.. and Loopenysis gave us the golden plate with the contest rules.

Five teams and five themes. The red team had to snap all things related with branding, the yellow team was tasked with lights and shadows, the blue team had digital as theme, the pink team had to make reversed photos and, finally, the green one had to shot angles.

Let the games begin! We spread up, lost each other, shooting all things … dead or alive…. Nothing or no one got the chance to escape from our cameras.

In the afternoon, we had all the memory cards full so it was the perfect moment to enjoy some local beers, as cold as the bottom of the Danube – trust me, we deserved it. That was the moment when we decided to turn back to our lovely bungalows. The flies missed us for sure, but not before buying some empowering tea from a hypermarket – we had to drink “tea” every day to keep us fit and alert.

The Loopies arrived in the camp! We made sure everybody found out… After dinner, we enrolled in a special beach party powered by DJ Gabriel Ross, (don’t get too emotional, he’s one of the brave Loopie soldiers). Great music, great people and trust me, a single drop of alcohol just for fun – we are professionals, after all! We had some very interesting discussions about the birth of the Earth, the latest books released and the progress of medicine.

The second morning came upon as faster than expected, but no worries, we had no problem being at our posts. With our noble task to capture Bratislava in our hearts, it was time for practice. I mean paintball time! Twenty five degrees outside, at least forty inside, we received really heavy camouflage uniforms and unfortunately the tea from last night was still dehydrating us. That is the reason why some of us had hallucinations and started to practice all the stuffs seen in action movies. At least we didn’t feel the pain anymore.

The rest of the day was about a tasty and classic barbeque and a visit to an art museum (the designers and their habits). We all felt that this is the best time to make our final move, so we hit the road again, determined to completely subdue Bratislava to our will. And guess what? We did! In less than two hours! (See? A good strategy goes a long way)

Tired, but happy, we gave a loud, victorious roar, ready to come back home, completely ecstatic by our successful mission.

As a normal consequence of such an epic journey, our batteries are now completely charged. We are ready to begin our expansion campaign, ready to conquer all the rest. Who will be our next target? Wait and you’ll see … (it’s a promise)

Categories: Agency life Tags:  capture Bratislava teambuilding the loopies
Previous
Why we loved GPeC 2017 and what is in it for you if you are in eCommerce
Next
TeCOMM 2017 – Sell them your story